Today is known in the Orthodox Christian Church as the “Leave-taking of Pascha.” (Here’s a talk given on this topic by a Russian Patriarch in Moscow in 1980. I share it here because I think it sheds some light on the continuous nature of Orthodox feasts.)  We have celebrated Christ’s resurrection for 40 days, and tomorrow is the Feast of His Ascension into Heaven.

For us, Pascha (Easter) isn’t just one day. We live the spirit of Pascha year-round, as every Sunday’s divine liturgy is a celebration of Christ’s resurrection. But when the feast comes around, we celebrate with much joy during the entire Paschal season. We greet one another with this greeting and response:

Christ is Risen! Indeed He is risen!

Tonight will be the last time we will use this greeting and response at St. John Orthodox Church here in Memphis until the Feast of Pascha next year. (Tonight we will have a vesperal divine liturgy for the Feast of the Ascension, which is tomorrow.)

It’s interesting how people from countries that are historically Orthodox have this greeting and response ingrained in them, whether or not they are actively involved in church. Recently my husband and I were in Beaufort, South Carolina, where we met a delightful Romanian man at a dinner in a friend’s home. When we met him, my husband looked at him and said (in Romanian):

And without hesitation the man replied:

How did my husband know this greeting in Romanian? In our church many people learn the greeting and response in other languages, and our clergy shout out the greetings as they cense the congregation during Paschal services, and the people shout back the response in the same language. We have people from Romania, Ukraine, Poland, Czechoslovakia, Greece, and other countries in our parish, and having this greeting and response said in their languages is a blessing for them and unites us all in our common joy over the resurrection of Christ. 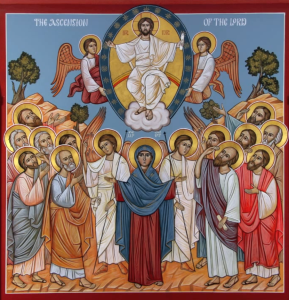 I’ll be missing the service at St. John tonight, due to a book reading/signing that had been scheduled several months ago, (for Tangles and Plaquees: A Mother and Daughter Face Alzheimer’s, at Trezevant Manor Senior Living’s Performing Arts Center, where I’ll be the presenter for their monthly “Southern Author’s Tour”) but I’ll be there in spirit. And tonight at the Feast of the Ascension, parishioners will exchange a new greeting and response:

Christ has ascended! From earth to heaven!