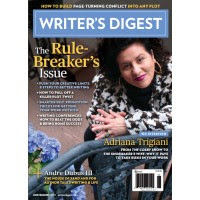 Two treasures arrived in the mail while I was in New York. Both are magazines with articles about the next two books in my “to read” stack. First up was the July/August issue of Writer’s Digest, with a terrific interview with Adriana Trigiani, author of The Shoemaker’s Wife (and a dozen other books.) I haven’t started the book yet, but Jessica Strawser’s interview with Trigiani makes me want to move it to the top of my list. One reason is that her words mirror some of the advice I received from my freelance editor after our first meeting about my novel, Cherry Bomb. Mary Ann (my editor) says I need to make my images more vivid, so the reader can see the ancient city of Alexandria, Egypt (one of the settings in the novel) and also smell, hear and taste its aromas, sounds and flavors. I’m shooting for literary fiction with my work, so I know she’s right. Read what Trigiani says about this element of her writing, begining with one of Strawer’s questions in the interview: 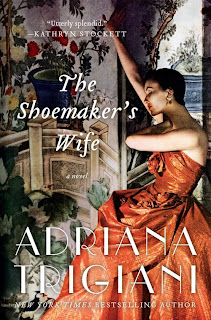 S: Your books are very atmospheric. How do you go about bringing a place to life, and why do you feel that descriptive quality is so important to a story?T: …. when I was a young writer I always worked hard on imagery, and I knew that the root of imagery were the senses–and that if my readers could feel, taste and see what I was talking about, I would be able to tell them a story. Sometimes I get criticized, because there are readers that don’t want all that [description], but I think it’s important. It’s the hallmark of my work, and I would never change that. It sets the stage for those real characters to come through and tell their story.

What a treat to read this interview just as I’m working to improve the imagery in my novel. 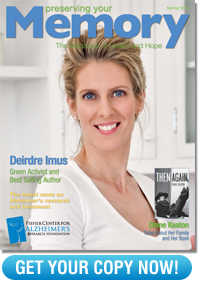 tion that arrived in the mail was the spring issue of Memory: The Magazine of Health and Hope, which is published by the Fisher Center for Alzheimer’s Research Foundation. It always contains the latest news on Alzheimer’s research and treatment, but also personal stories. 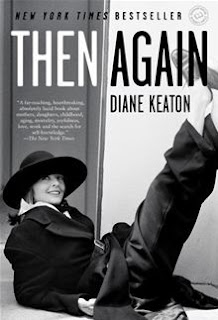 In this issue there’s an article about Diane Keaton‘s memoir, Then Again, which shares that top spot on my “next book to read” stack. Keaton has always been my favorite actress, but when I discovered how much we have in common, I loved her even more:

We both have mothers with Alzheimer’s. We both have adopted children.We have both struggled with eating disorders.

We both lost our fathers to cancer.We both love hats.

(Okay, I guess that last one isn’t so significant, but I was thrilled to be told I look like Diane Keaton once.)

One thing I love in the article is what Keaton said when asked what advice she would give to caregivers (of people with Alzheimer’s):

“I don’t feel like advice is what people need. They need to be heard. And they need affection.”

Keaton went on to describe what she learned about caring for her mother during her decline, and also her father, when he was sick with cancer:
“Because you’re supposed to do the right thing, you are making that time you have together conflicted, unpleasant. It’s unpleasant anyway. I think that’s all you can do, to make them comfortable. Bring the dogs and cats in. Whatever they want. Who cares.”

Keaton and Trigiani. Can’t wait to dive into both books! Have a great weekend, everyone!

2 thoughts on “>Vivid Images from Trigiani and Keaton”