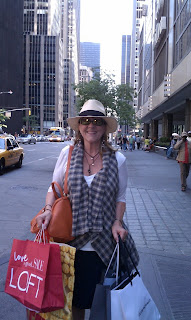 We’ve had five wonderful days in New York City (leaving this afternoon) and of course photos can’t really capture the experience, but I’ll share a few.

SHOPPING is always a treat here… on Fifth Avenue, in the Chelsea Market (new to me this year), and in the cool boutiques on the Upper East Side and down in the Village. 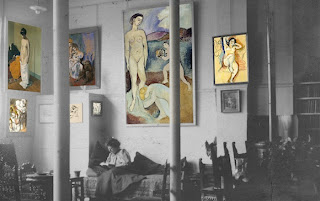 The Metropolitan Museum of ART is always a must see when I’m here, and this year the rooftop exhibit was a special treat, as well as “The Steins Collect: Matisse, Picasso and the Parisian Avant-Garde.”

Our choice of a BRO 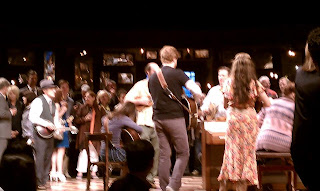 ADWAYP PLAY was “Once,” which received the most Tony nominations of any show on Broadway this year. The writing, set design, acting, singing, and choreography were all fabulous. Before the show and during intermission, they opened up a bar ON STAGE where audience members could buy a drink while being serenaded by cast members! (s 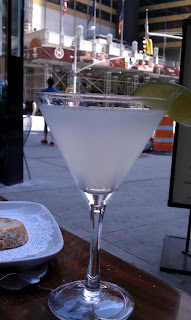 After discovering a FAVORITE NEW DRINK, the “Moscow Mule,” in Denver in April, it was fun to find another new favorite here in New York, the “French 75.” It’s got champagne, gin and lime. Nothing fancy, but the mix was wonderful, and we enjoyed them on the patio of a cafe just a block from our hotel… several times:-) Evidently it’s named after a WWI artillery gun, because it’s got quite a kick.

I guess a trip to the Bi 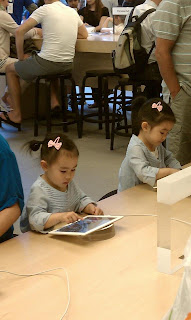 g Apple wouldn’t be complete without a visit to the APPLE STORE across from Central Park. My hubby has been wanting to get a Mac, (he got a MacBook Air) so we spent our first afternoon here at this store, which had a cool see-through elevator that went through the core of winding steps down from the sidewalk level. My favorite part of the store was the “kids’ table” where there were always a group of techy tots having a great time, like these two little girls, who reminded me a lot of my granddaughters.

We’re headed back to Memphis this afternoon. Next year’s ASH (American Society of Hypertension) meeting is in San Francisco (my husband was speaking, which was the reason for the trip) so I’m saying goodbye to NYC for a couple of years. I’m actually ready to get back to Memphis and finish revisions on my novel. Have a great hump-day, everyone!

3 thoughts on “>Wordless Wednesday: 5 Days in the Big Apple”