>I fell in love with Três Taylor’s work about ten minutes before I met him. I was at the River Arts Fest in the South 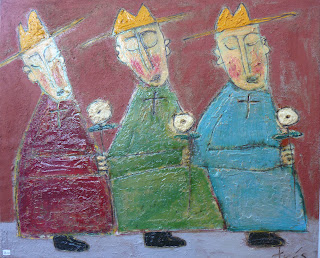 Main district of downtown Memphis on Sunday, with my friends Caitlyn Manning and Brandon Maas. Cruising up and down South Main, enjoying the music and wine and gorgeous weather, I was drawn to Três’s booth by the colorful panels on the outside of his tent. Tall, skinny, primitive images of men, women, and monks. Yes, monks. Some were painted on boards and others on roofing paper. 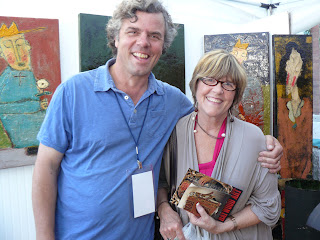 Once inside the booth I met Três and his lovely wife, Helene, and that sealed the deal for me. Helene was beautiful, gentle and energetic at the same time, and began to pull panels from here and there and arrange them on the ground to help me with my selection. And then Três appeared and smiled at me and I felt like I had stepped onto a stage where the musical “Godspell” was being produced and Três played the part of Jesus.

You can read his story on his 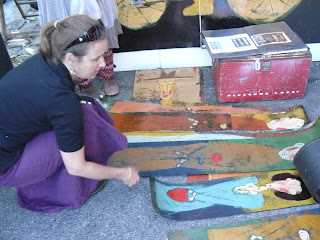 website, but let me just say that he was a biochemist for twenty years before a spiritual experience moved him to become an artist. His works show all over the world, but I love that he and his wife give back to the community by organizing group mural projects in some of the poorest communities in the country, in rural Alabama. You can read about them here. I just had this soul connection with the Taylors immediately. 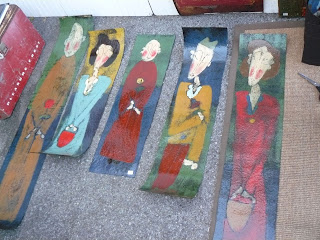 I’ve been looking for some sort of “representational family portrait” for a long time, and these panels are the closest thing I’ve found. I chose one to represent each member of our family, which was so much fun.

When I explained my quest to the Taylors, Helene asked, “what kind of children 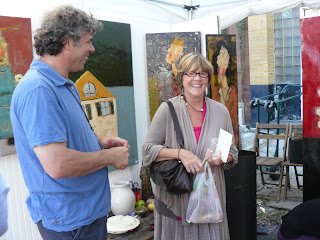 do you have?” and I said, “two Asian and one white,” which seemed to double everyone over with laughter. I didn’t get it, until Helene caught her breath and said, “I meant how many girls and how many boys! I’ve never had anyone give an answer like yours before… it just never occurred to me!”

I guess I don’t think of gender as a “kind” of child, or adult for that matter. But maybe race isn’t a “kind” of person, either.

So what kind of children do I have? Hmmm…. 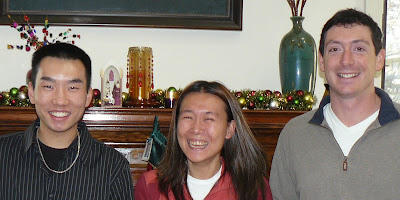 I have a beautiful, smart, generous, intuitive, artistic, athletic daughter who happens to be South Korean in race and female in gender. But even as I write these words, I’m thinking that being Korean and female are part of what “kind” of person she is. It’s just that those aren’t the aspects of Beth that come to mind when I first think of her. If someone says, “Beth,” I don’t think: “Asian” or “girl” …. I think beautiful, smart, generous, etc. Beth is in her final year of architecture grad school, having majored in biomedical engineering in undergrad….

One of my sons, Jason, is charming, witty, loyal, kind, protective, loving, spiritual, artistic, athletic… and he also happens to be Korean in race but is male in gender. Jason is married to a beautiful woman named See, and has a precious three-month-old daughter, Grace.

My oldest son, Jonathan, is handsome, intelligent, literary, athletic, strong, and affectionate, and he happens to be white and male. (And on his way to Afghanastan soon… he flies helicopters for the Army… please keep him in your prayers this next year!)

I didn’t start out this blog post thinking I would write so much about my kids, 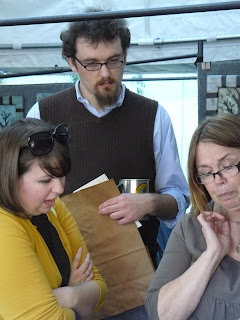 but it just sort of happened organically☺

After the selection of my five art panels was complete, Caitlyn found another artist she was drawn to, so Brandon and I helped her select a painting for her new apartment. I didn’t really get a picture of it, just a shot of the artist showing her several options… 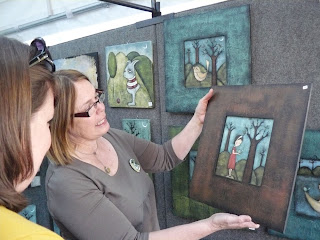 And Brandon looking on. 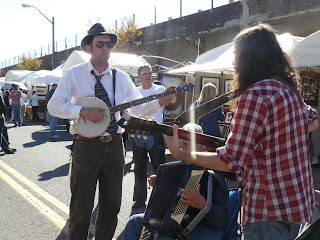 cafes and looking down from their warehouse condo windows or riding the trolley or horse-drawn carriages. Musicians and artists and food vendors and neighbors and visitors…. a delightful festival!

The children’s activities were also wonderful. 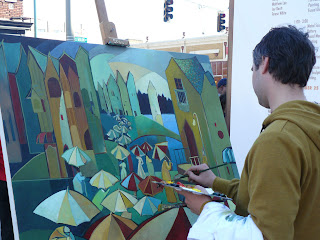 Several artists were demonstrating their work, like Brad Troxel, whose paintings I really liked. 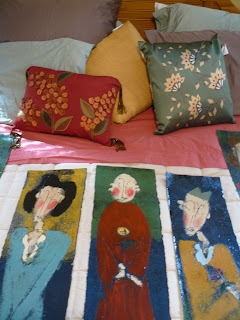 how to hang them… our headboard is curved, so I bought two long panels and three short panels with that in mind. We even hung the one that represents him (in the monk’s robe, since he’s a priest) over his side of the bed, and the one that represents me (woman with the red dress on!) over my side. The “little monk” is Jason because it reminds me of when he visited Korea and came back with a ceremonial robe. He put it on and made a customary bow to his father and I. The tall guy in the hat is Jon because it reminds me of his “cavalry” hat the helicopter pilots wear with their dress uniforms, and the body language looks like the playboy he sometimes can be. And then there’s the dark-haired mysterious beauty, Beth. 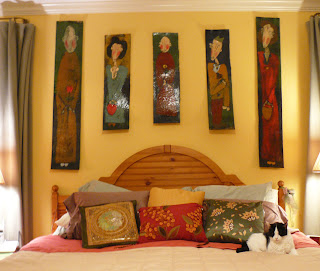 I’m thrilled with how they look in our newly painted bedroom. Can’t wait to get the bedspread made and it will all come together.

Like the bathroom, which is now complete with shower curtain … 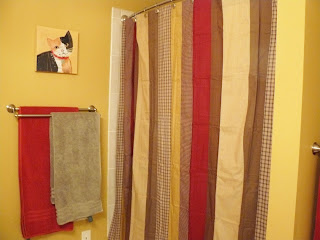 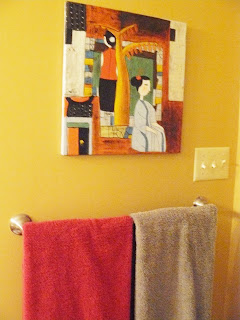 and art work. (This painting is by a Vietnamese artist. I bought it in Little Rock a couple of years ago.) Yep, this house is definitely getting some soul. And all kinds of people.

Here are a few more photos from the River Arts Fest. Enjoy! 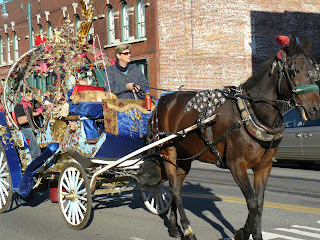 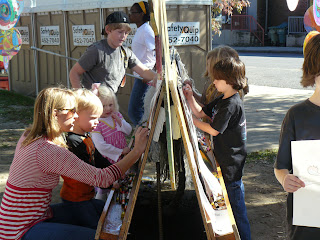 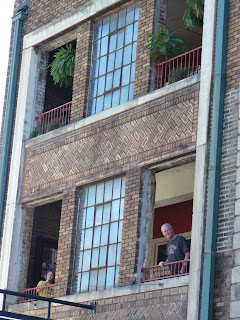 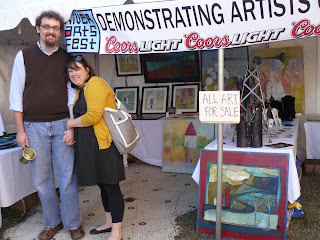 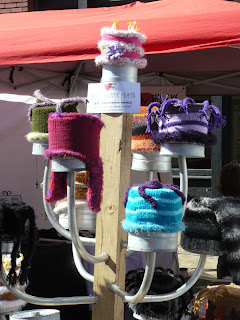 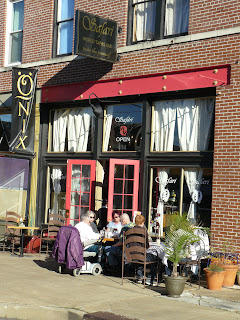 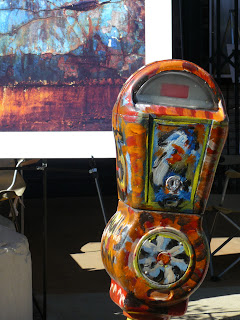 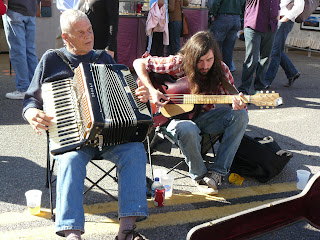 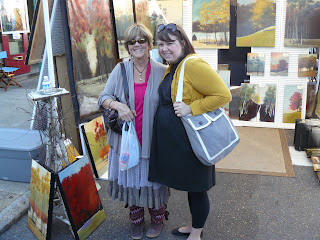 3 thoughts on “>What Kind of Children Do You Have?”