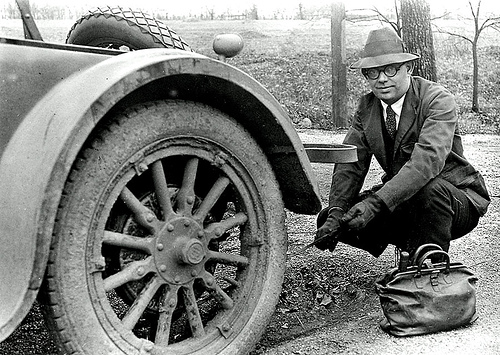 This is a story my Memphis friends will love. My husband had a flat tire downtown yesterday. First he called roadside assistance. (This had just happened a couple of weeks ago on the interstate near downtown, and the roadside guy changed his tire that time. A Memphis policeman pulled up behind him and asked if he was okay. When Bill told him he was waiting on assistance, the policeman said he would wait with him, and he did. Kudos to the Memphis cop for that.)

But this time, although it was scorching hot, he started changing the tire himself rather than waiting on assistance. He wanted to see if he could do it.

Downtown Memphis. Within a few minutes 8-10 apparently homeless men approached him while he was changing his tire. They each asked him for money. This wasn’t a new experience for him (or me) since we lived in midtown Memphis for 25 years and have lived downtown for seven years. We are used to giving “alms” to the homeless, and we do it cheerfully. But not when we’re on the ground trying to change a flat tire!

Bill was having a hard time changing the tire alone. Suddenly a woman (also apparently homeless) approached him. She didn’t ask for money. She didn’t say anything at all. She just started helping him. She even asked some of the men who continued to approach to back off. Once the job was finished, he gladly offered her money, and she humbly accepted his gift, as he had accepted hers.

I’m sure some of you are thinking that the woman’s motives were no different from the men’s, that she was just wanting money. But that’s not ours to judge.

10 thoughts on “A Little Help from our (Homeless) Friends”