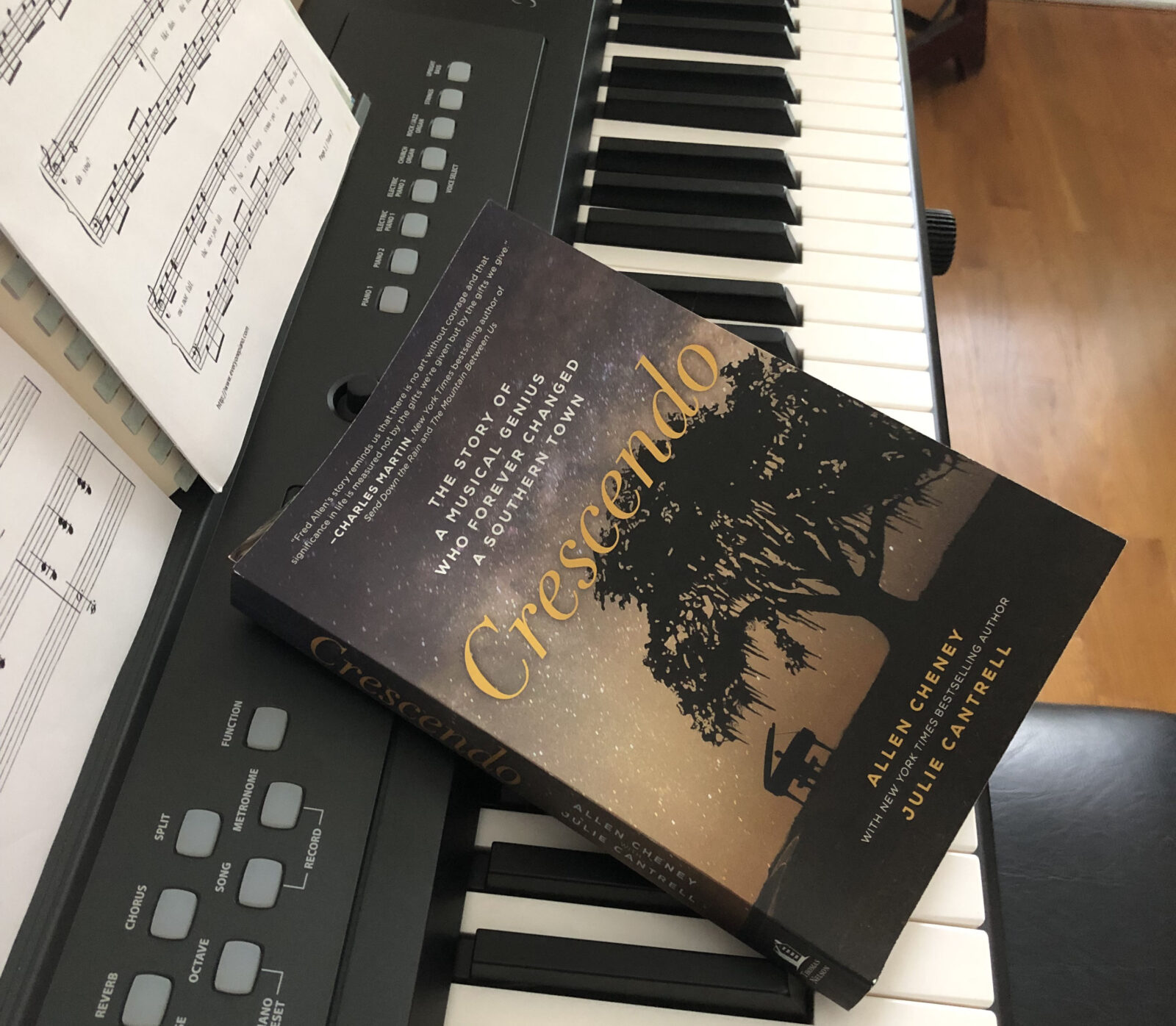 I had never heard of Fred Allen, the musical genius from a poor family in LaGrange, Georgia, and his gifted wife Winnie. I probably wouldn’t have read their story in the new book Crescendo if I didn’t know Julie Cantrell, the New York Times best-selling author who co-wrote the book with Fred Allen’s grandson, Allen Cheney. I’m glad the stars aligned and I found this book and read this incredible story!

Crescendo isn’t just the story of a brilliant musician’s rise to fame, although there are elements of that in the book. And it isn’t just the story of Fred and Winnie Allen’s romance and enduring marriage, although that’s in there, too. It isn’t even just the story of Allen’s tough decision to leave the spotlight of New York City and a chance to star in a potentially Tony-award-winning show to move to a small town in Georgia and follow a different set of dreams, but yes, that’s in there, too. (I’ll let you read the book for those exciting stories!)

Here’s what I loved most about the book. It’s the candid revelations of the childhood neglect and abuse that Fred Allen suffered–not only from his parents and bullies, but also from an uncle who molested him. For those who have never experienced this, it might be hard to understand how that abuse can haunt a person his whole life, even when his life is full of success, as Allen’s was. He was tormented by sleeplessness late in his career:

In the end, it didn’t seem to matter how much Fred had accomplished, how far he had come. He would always be that little boy from the mill village trying to prove his worth.

This is how I often feel, even with the “success” I’ve achieved in my late-life writing career. The abuse I suffered as a child and young adult continue to keep me feeling “less than” and always wanting more. When Allen was taunted by (jealous) teachers at the school where he taught, he struggled against their attacks:

No matter the age, no one wants to be on the receiving end of cruelty, and Fred was especially susceptible to its effects, having fought long and hard to find a place where he belonged.

I’ve written more than once about Robert Goolrick‘s powerful memoir The End of the World As We Know It and how his words impacted my life. (Here’s an essay I had published in Writer’s Digest about Goolrick’s words.) I’ll share an excerpt from that essay:

Goolrick was raped by his father “just once” when he was a small boy and his father was drunk. His memoir describes, in the most powerful, dark, poetic prose I’ve ever read on the subject, the ongoing affects on the soul of the person who is violated in this way:

If you don’t receive love from the ones who are meant to love you, you will never stop looking for it, like an amputee who never stops missing his leg, like the ex-smoker who wants a cigarette after lunch fifteen years later.

I believe that Allen did eventually find “a trace” of that love he didn’t receive as a child. Cheney and Cantrell describe it here, in the book:

Now, with Winnie and Allison at his side, he sensed a newfound peace forming within him. A feeling of wholeness, or at least as close as he had ever come to it.

Another struggle I share with Allen is that we both used alcohol to try to numb our pain. As I’ve shared here on my blog, I quit drinking two years ago this coming September, and I was encouraged to read that Allen was also able to do this:

He had come so far from the broken days in New York City, but he still carried one last piece of his family’s dysfunctional legacy. More often than not, the last few years had led him to stiff drinks, despite his susceptibility to the effects of alcohol. . . . It was time to break the habit, if not for himself, then for his students.

I personally believe that sobriety was as important an accomplishment as the many awards he received in his music career. I know it has been in my life. Also the Allens’ marriage of 63 years is a testament to and probably a major contributing factor in Fred Allen’s healing. As my husband and I look forward to celebrating 50 years of marriage next June, I am thankful for his love and the part that plays in my own healing. Congratulations to Fred and Winnie Allen, and to Allen Cheney and Julie Cantrell for this wonderful book!