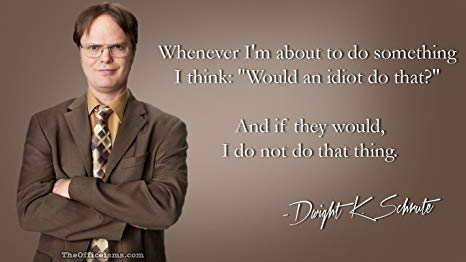 So this happened. On Sunday morning I was sitting with my 16-year-old Goddaughter Sophie at St. John Orthodox Church and we were both looking at the back of the bulletin, where our pastor, Father Philip Rogers, always puts spiritual quotes. The heading at the top of the page says, “From the Fathers (and others).” Sophie and I both started giggling when we read the first quote on the page, obviously from one of the “others”:

“Whenever I’m about to do something, I think, ‘would an idiot do that?’ and if they would, I do not do that thing.”—Dwight Schrute

If you don’t know who Dwight Schrute is, you must not have been a fan of “The Office” on NBC. Here’s the video clip where Dwight shares this particular piece of wisdom.

If it seems a bit sacrilegious for Dwight to be keeping company with the likes of St. John Chrysostom and St. Silouan and Elder Thaddeus, you should have heard Father Phillip’s homily. Yes, he even preached on not being an idiot, telling us about the Greek word for “idiot,” which is βλάκας, and has to do with a person who doesn’t participate in public life but is, as Father Phillip said, “all inside his own head.” An idiot, by this definition, doesn’t listen to others, but acts on his own will.

Father Phillip went on to tie this concept into our Orthodox Christian spiritual practices, such as fasting, prayer, and almsgiving, which we are paying special attention to during the Nativity Fast, which began on November 15. When we do these things—fast, pray, and give alms—we often have to go against our own will (our passion for food, pleasure, and material things) and deny ourselves. Otherwise, what are we doing? We are being idiots.

I am often an idiot, (*hangs head*) especially when it comes to food. As you know if you’ve been following my blog for very long, I struggle with fasting as a spiritual practice, and with lifelong eating disorders. My cravings seem to take turns, and for about a year now I’ve been craving (and indulging in) Hershey’s kisses. I’m not talking about two or three at a time or even a handful. I’m talking about eating an entire package at a time. Several days a week. For over a year so far. I’ve prayed about it. I’ve sought counsel and been to confession. There’s no quick and easy answer (as there wasn’t for my alcohol addiction) but I feel like God keeps throwing out nuggets of encouragement, and Father Phillip’s sermon yesterday was a big one. I keep thinking, as I consider eating another bag of kisses, “who would do that? An idiot, of course!”

And as He often does, God handed me further encouragement with this morning’s prayers, as I read the daily quote from my Orthodox Lives of the Saints calendar:

“If someone is suffering inner torment and afflicted by a certain passionate thought, and puts it in action, the passion is strengthened against him. In other words, he gives the passion the power to torment him more. If, on the other hand,he struggles and battles against his thought, exercising the opposite, then—as I have told you many times—the passion becomes weak and powerless to torment him. Thus, little by little—struggling, with the help of God—he overcomes the passion.”—Saint  Dorotheos of Gaza

Last week I was traveling on my book tour for Friends of the Library from Tuesday through Friday, and somehow I was able to avoid buying and eating any Hershey’s kisses on those days, probably because I was already getting a bit of a high from my activities. And then I returned home on Friday, and on Saturday I was home alone and bored with having to do mundane things, so I found myself once again tempted and I gave in to another package of kisses. I ate them all at once (as usual) while watching TV (also as usual—the perfect venue for mindless eating.) Asking God’s forgiveness (again) I went to bed a bit despairing that I would never overcome this passion. If you are laughing now because I’m talking about Hershey’s kisses, then you just don’t get it, and maybe that’s a good thing, for you. It’s been over two years since I quit drinking, and this chocolate passion feels so similar to my craving for alcohol.

So, today as I move forward by God’s grace, I am going to remember the words of Saint Dorotheos of Gaza. And Dwight Shrute.