As my 2018 book tour begins to wind down, I’m happily looking forward to events with all four of my books in the coming months. Marketing books is a marathon, not a sprint, although those first weeks and months coming out of the gate are important. This year’s release, SOUTHERN WRITERS ON WRITING (University Press of Mississippi, May 2018), has been so much fun to promote. I’ve been able to meet up with 22 of the 26 contributing authors at fourteen events in five states since May, including this past weekend’s panel at the Louisiana Book Festival in Baton Rouge, where I was joined by M. O. “Neal” Walsh, Nicole Seitz, Joe Formichella, and Suzanne Hudson.

I was also on a panel for my novel CHERRY BOMB, (on sale on Kindle for $4.99 right now!) with three other authors, talking about “Women’s Journeys of Self Discovery in Fiction.”

Yes, the three books I published in 2017 have still got legs, and I’m looking forward to promoting them into 2019. Here’s what’s coming up: 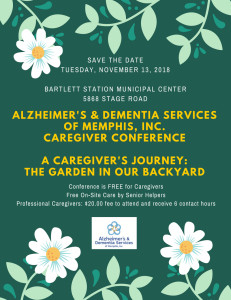 November 13 (TOMORROW!) at 9 a.m. I’ll be speaking at the Alzheimer’s and Dementia Services of Memphis Caregiver Conference in Bartlett, Tennessee:

“A Caregiver’s Journey: The Garden in Our Backyard”

My topic is “Dealing With Disease and Relationships,” and I’ll be reading from the first book I published, TANGLES AND PLAQUES: A MOTHER AND DAUGHTER FACE ALZHEIMER’S (January 2017) and offering copies at a discount to caregivers. This book was published almost two years ago, and it’s a mixed blessing that it continues to be relevant, as Alzheimer’s disease is the only cause of death among the top ten in America that cannot be prevented, cured, or slowed. It’s the sixth leading cause of death in the United States. One in three seniors dies with Alzheimer’s or another form of dementia, and more than fifteen million people provide care to people with dementia. I’m hoping to bring some encouragement—and yes, even some humor—to some of those caregivers here in the Memphis area tomorrow.

December 18, at 5 p.m.—I’ll be back at Lemuria Books in Jackson, Mississippi, where my novel CHERRY BOMB (Dogwood Press, August 2017) launched sixteen months ago. This time I’ll be joining a few other Dogwood Press authors for an event celebrating the press. Watch for more details soon!

January 17, 2019—I’m headed to Jefferson, Texas, for another Pulpwood Queens Girlfriend Weekend. This time I’m moderating my fifteenth panel for SOUTHERN WRITERS ON WRITING, and I’ll be joined by 8-10 contributors!

March 1-3, 2019—I’ve been invited to speak at a women’s retreat at The Homestead Education Center in Starkville, Mississippi. Alison Buehler, an author and speaker who lives at the Homestead and directs retreats and other events there, came up with the idea to have a retreat around the themes in the first anthology I edited, A SECOND BLOOMING: BECOMING THE WOMEN WE ARE MEANT TO BE (Mercer University Press, March 2017). Several contributors to the book will be joining me to also speak at the weekend retreat: Nina Gaby, Kathy Rhodes, Ellen Morris Prewitt, and Jennifer Horne. Promotional materials and more details will be out after Christmas, but mark your calendars if you’re interested in this retreat!

2 thoughts on “It’s a Marathon, Not a Sprint”