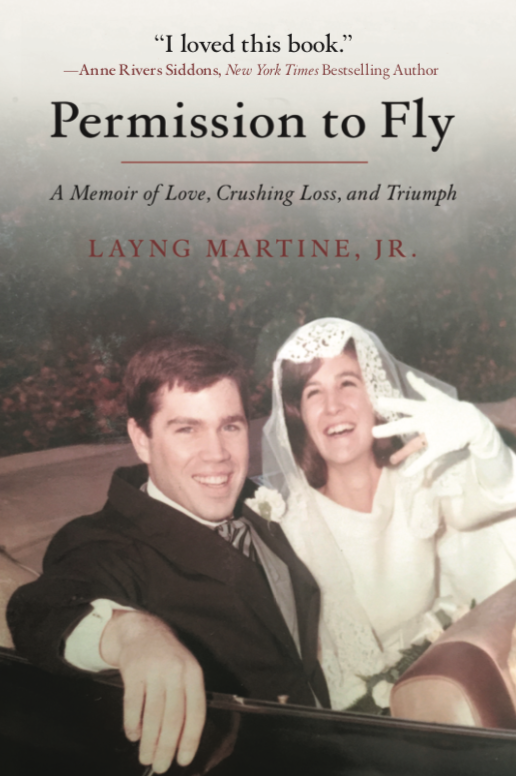 Layng Martine Jr.’s memoir Permission to Fly took me completely by surprise. I was unaware of Martine’s fame as a Nashville songwriter before hearing about this book. A member of the Nashville Songwriter’s Hall of Fame, Martine co-wrote such songs as “The Greatest Man I Never Knew” (Reba McEntire) , “Rub It In” (Billy Crash Craddock), “Way Down” (the last song Elvis Presley cut before his death in 1977) and is the author of a NEW YORK TIMES most-emailed Modern Love essay. I got his memoir because I found out that Martine will be a keynote speaker at the 2020 Pulpwood Queens Girlfriend Weekend. I wanted to read his book before meeting him in January.

Although I loved all the stories about his journey in the music industry and the famous people in his life, those weren’t my favorite parts of the book. It was his relationship with his wife Linda that took my breath away.  Linda said it best, after the accident that left her a paraplegic: “It was all too perfect, wasn’t it?” Read “In a Charmed Life, a Road Less Traveled” here.

Six years ago I was in a car wreck that left me with a broken neck, broken leg, and broken ankle. I spent three months sleeping in a hospital bed in my downstairs office because our house at the time didn’t have any downstairs bedrooms. Graduating from a wheelchair to a walker to crutches, months of physical therapy and six months in a neck brace, I was thankful to be alive and not paralyzed. My husband was a wonderful caregiver, and thankfully his duties only lasted a few months, and my condition was minor compared to Linda Martine’s. The Martines have been at this for over twenty-five years.

Martine’s candid and emotional revelations about their marriage were what took the book up a level from its already top-notch memoir status. His writing is superb; his humor is point on; but the passages that gave me permission to cry make this book a treasure.

I’ll close with a few words of wisdom that Martine shares in his book. I’m going to print off three of them and put them next to my computer where I’ll remember to read them frequently:

I saw that the ability to simply keep going may be the most valuable of all skills.

I saw how much it helps to be able to state exactly what you want in one clear sentence, both to yourself and to anyone else an then go for it.

I found that all of us human beings need respect almost more than we need food.