Tomorrow, April 1, is my Name Day. In the Orthodox Church, one’s Name Day is the day that a person’s patron saint is commemorated. Saint Mary of Egypt is my patron, and she actually gets two feast days in the Church calendar: April 1 (commemorating her death) and the Fifth Sunday of Great Lent (a moveable date). I have sometimes thought it an odd coincidence that her Feast Day coincides with April Fools’ Day in the American secular calendar. While Mary of Egypt doesn’t exactly fit the criterion for a “fool For Christ,” her life is certainly exceptional.

I’ve blogged about her numerous times, so if you want to see my previous reflections on her, check out these:

“M is for Mary of Egypt”

“A Different Kind of April Fool”

But this post isn’t going to focus on Saint Mary’s importance in the tradition of the Church. Today I’m writing about her place in fiction. She was a real person who lived in Egypt in the fourth century, but I fictionalized her childhood in my novel, Cherry Bomb, and gave her the name, “Neema.” She is one of the three main characters in the novel. Another character is Elaine deKooning. She is based on the real-life Abstract Expressionist artist of the same name, but I fictionalized much of her life in my novel. The third character, “Mare,”—the protagonist—is a completely fictional character. The idea for interweaving the lives of fictional and non-fictional characters isn’t new with me, of course. Michael Cunningham’s novel, The Hours, was the inspiration behind the structure for my book, and there are others out there with similar approaches. 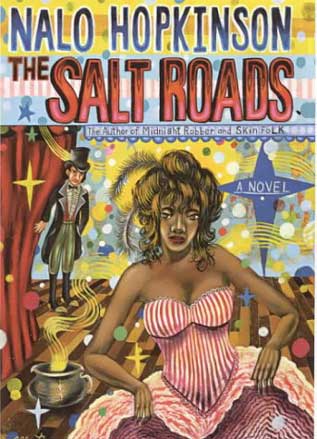 So imagine my surprise to discover yesterday, as I was preparing this post, a science fiction/fantasy novel with a similar structure… including a character based (loosely) on Saint Mary of Egypt! The Salt Roads by Nalo Hopkinson is about a fertility goddess who inhabits three different female characters at different times during the story. One of those characters is “Thais,” also known as “Meritet,” a young girl sold into prostitution in Alexandria, Egypt, in 325. She even goes to the desert, where she is found by Priest Zosimus (which parallels the true story of Mary of Egypt) who believes she is a prophet who “speaks the word of Mary.” Junot Diaz called The Salt Roads “a book of wonder, courage and magic.” I’m not a sci fi/fantasy fan, but I might have to read this one! Published in 2003 (Warner Books/Grand Central Publishing) its genre is listed as “folk tale, historical novel” on one site, but as science fiction/fantasy on another. Publishers Weekly called it a “spiritual odyssey” when it came out in 2003.

I may have to use it as a comp (comparable title) for Cherry Bomb as I continue to query agents. Mostly I’m excited to discover another writer (and one who has one numerous awards) who included Mary of Egypt in her writing. I think we’re after the same thing—showing the truth of the human heart. I wrote about this in a blog post over a year ago:

“Blending Historical Figures with Fictional Characters: Going After the Truth of the Human Heart”

Today’s post replaces my usual Mental Health Monday post, because I’ll be in Gulfport visiting my Goddaughter, Katherine Thames, and her family for a couple of days. I haven’t visited them in 3 1/2 years, although I did see Katherine and Hardy at our daughter’s wedding in 2011. It’s supposed to be rainy, so I probably won’t be walking on the beach or kayaking down a bayou on my Name Day, but I’ll be so happy just to be hanging out with these folks I love so much. Katherine and Hardy have three wonderful kids who are 9, 11 and 14. It’s their spring break, so I won’t be surprised if some April-fooling goes on while I’m there….

3 thoughts on “Saints on Sunday: Mary of Egypt in Science Fiction/Fantasy”