The older I get, the more I value family. It seems I’m not alone, since my second cousin Lee Brackett Smith friended me on Facebook recently and we discovered that we both live in Memphis, and we haven’t seen each other since we were kids in the sixties! Her father and my father are first cousins. When she saw that I was speaking at the annual Alzheimer’s Caregivers Conference in Bartlett, where she lives, in November, she wanted to come but had a conflict, so we met for lunch instead. I was going to be talking about my book TANGLES AND PLAQUES: A MOTHER AND DAUGHTER FACE ALZHEIMER’S. Lea’s mother, my cousin Janet Brackett, has a brain tumor and is showing signs of dementia, although it’s hard to say what the brain tumor might be causing. 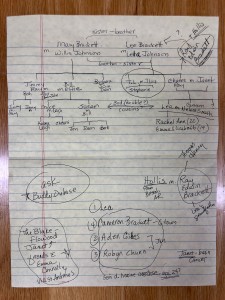 I had so much fun visiting with Lea. We started drawing a family tree and asking each other questions to fill in the blanks. Then I emailed a couple of more cousins in Mississippi to try to complete the tree. One fun fact is that my grandmother and her brother married Lea’s grandfather’s brother and sister, so there are all sorts of double cousins as a result.

Lea’s mother Janet is from England. When I first met her I was about 10 years old and I was enchanted by her. With her straight black bangs and mod clothes and British accent, she reminded me of Audrey Hepburn. 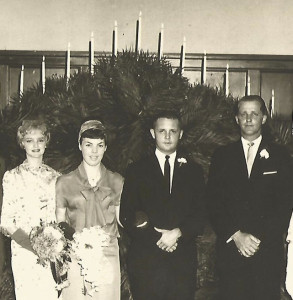 She married my cousin Charles Ray Brackett back in the 1960s, and Lea sent me these photographs from the wedding. I love this one, with my aunt Barbara Jo and my daddy, Billy Johnson, flanking Janet and Charles Ray. 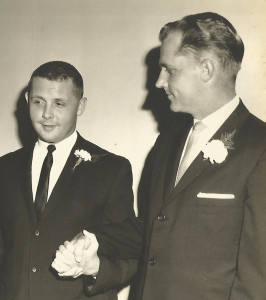 And this one of my father and his first cousin Charlie holding hands before the wedding!
The last time I saw Charles Ray was in May of 2016, when he came to my mother’s funeral.

He died a few months later, so I was so glad he had come to her funeral. 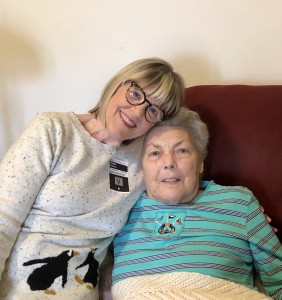 So, this week I was driving down to Jackson for a book signing at Lemuria Books on Tuesday, so I told Lea I wanted to visit her mother. She is now in assisted living, and I went to the lovely facility on Wednesday. I wasn’t sure if she would remember me—we haven’t seen each other in decades, and she has a brain tumor—but when I walked into her apartment, she looked up and said, “Susan!” We embraced and had a lovely visit. I took her the photographs from her wedding, and also new photographs of my family. Her long-term memory is pretty good, but she couldn’t remember that she had been in the hospital a few days ago. She has no pain, only some blurry vision, so she’s thankful to be pain-free.

At some point I noticed an icon of an angel hanging by her door. I turned it over and read “To Nana from Mitch.” I asked her who Mitch was. He’s one of her grandsons. I asked if he was Orthodox or why he might have given her an icon, and she said no, she didn’t know where he got it. It was one of those icons from Greece with the official information on the back. I told Janet that I used to paint icons and I kissed the angel and asked him to watch over Janet.

As I drove away from Janet’s apartment and back to Memphis, I realized that there are more cousins in Jackson I haven’t seen in years . . . . maybe I’ll hunt them down in 2019!

1 thought on “The Importance of Family”