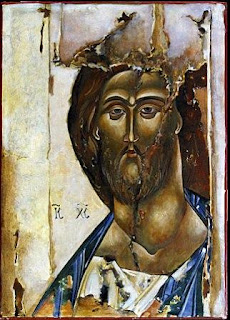 this month. I asked about the iconographer and checked out her web site. Her name is Mary Jane Miller. Her “icon” (which is not really an icon) called “Wet Jesus” is at right.

I’m not in the habit of writing negative reviews, but iconography is a sacred art, and I feel compelled to mention a couple of things about Ms. Miller’s work.

The first thing that I noticed about the web site is that the iconographer doesn’t reveal her source of instruction. I would guess, by her style and some of the prototypes she uses, that at some time she studied with the Prosopon School, as I did, initially. Vladislav Andrejev, the founder of Prosopon, has developed many 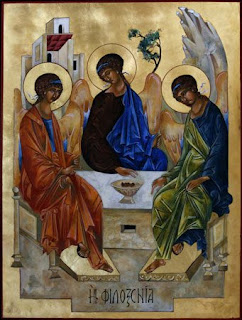 prototypes from Rublev’s icons, including this one, of the Holy Trinity, (at left) which Ms. Miller offers on her web site, here. (Her copy is at right.)

And then, her example of the stages of this icon of an angel are exactly like the stages I was taught by the Prospon School. If she did study with the Proposon School, and continues to use their prototypes, I think it would be good for her to acknowledge the source.

The next thing I noticed was the language she uses to describe the purpose of the icon, that it’s to “bear witness to two realities, the divine and the human, united in an undivided manner. The intent here is not to communicate human ideas about humans or spiritual concepts about the truth, but rather to ask the question, ‘who’s are we?’”

I’m wondering if she meant to use the word, “whose” rather than “who’s” … but either way, this definition of the purpose of iconography isn’t even close to what the Orthodox Church has believed and proclaimed about icons from as early as 787, when 350 bishops confirmed the veneration of icons at the Seventh Ecumenical Council in Nicea, saying:

“For the making of icons is not an invention of painters, but an ordinance and tradition approved by the universal Church. It therefore expresses the conception of the holy fathers and their tradition, not that of the painter. Only the art belongs to the painter. The regulations clearly are those of the venerable holy fathers.”

Icons are often called “windows to Heaven,” because they open a way for us—through the veneration of Christ, His Mother, or the saint or angel represented thereon—to transcend our earthly limitations and worship more fully. They enhance our worship. They are liturgical art. They belong to the Church, in the same way that liturgical music, prayers and architecture belong to the Church. We don’t decide to change them on a whim, but we respect the tradition handed down to us through the centuries as part of the liturgical framework of the Church.

As an iconographer, I pay close attention to the canons and traditions of the Church where icons are concerned. I try to approach the work prayerfully, using canonical prototypes and materials (wood, gold leaf, paint) as I learn from the examples of the early iconographers and those who have continued in the Orthodox tradition. 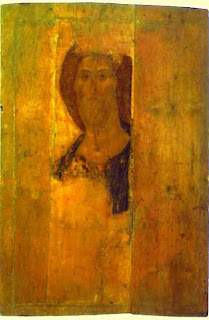 So… when I see, for example, a well-known icon of Christ by the fifteenth century iconographer, Andrei Rublev, copied, changed a bit, and given the name, “Wet Jesus,” I can’t help but cringe. (That’s “Wet Jesus” at the top of the post, on the right.) This icon of Christ, (original is at left) salvaged from the Annunciation Cathedral in the Moscow Kremlin (original building was destroyed), is a well-known classic image—one that shouldn’t be messed with in this way.

And then Ms. Miller offers for sale on her web site this icon of 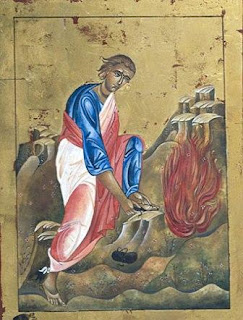 Moses removing his sandal before the burning bush (right). This Icon is from the early 13th century. The original is at St. Catherine’s Orthodox Monastery at Mt. Sinai—I saw it at an exhibit at The Metropolitan Museum of Art in New York City a few years ago when it was on loan 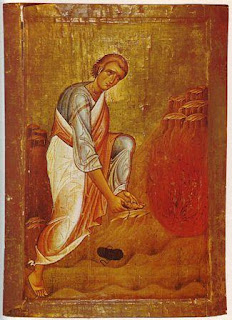 from Mount Sinai. Here’s a picture of the original (left) with historic information about the icon. It’s fine to copy a prototype such as this, but again, it’s good to acknowledge the source. When I teach a class, I always use a canonical prototype, and I always explain the source, as I do with commissioned icons.

And lastly, here’s one of Ms. Miller’s two pieces, under 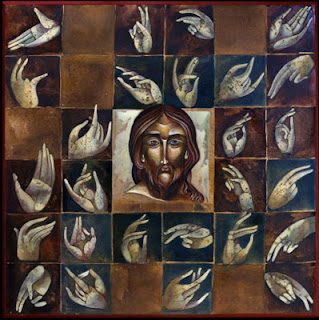 “New Work.” These two pieces, which she titles “Christ as Language,” are interesting art, but are not icons, and should not be called icons, whether or not they are good or interesting art.

Okay, I realize that I’ve just advertised Ms. Miller’s work for free, like Oprah exposing James Frey… but we’re still free to choose here in this country. And if you’ve read my post, you’ll at least be making an informed choice. Or not. Depending upon how informed you consider my humble opinion to be! You can read my article, “Icons Will Save the World,” which was published in First Things, here, if you want to know more of my opinion on iconography. Oh, and one note about the Episcopal Church that’s hosting Ms. Miller’s exhibit: it’s not really surprising that they would approve of innovation, since they’ve only been a church since 1534 themselves, and iconography, like the Orthodox Church, dates back to the first century. 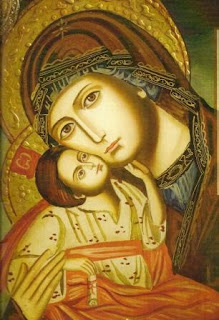 I wrote most of this post yesterday, but then I decided to sleep on it and look at it again this morning, making sure I wasn’t writing it as an emotional reaction. But as I was looking through yesterday’s mail with my morning coffee, I found a catalogue from an Orthodox company that sells books and icons. Again with the cringe…. The icon on the cover (here’s a detail, at left) is a strange mix of styles, not typical of traditional, Byzantine iconography. The faces are a mix of Byzantine and Western, very stylized but too realistic. They contrast with the highlights in the Christ Child’s hair and in his garment and the garment of the Mother of God, which are very loosely done, without much apparent regard for traditional techniques in iconography. In fact, the highlights on the Mother of God’s blue inner garment are really kind of sloppy, like they were done by a different person than the one who painted the faces.

Much ado about a catalogue cover? Maybe so, but like book covers, it speaks to what’s inside. Or it should. And although I know this company actually sells some decent Byzantine icons, in this case, you definitely can’t judge the book by its cover.

Okay, I’ll try to get back on a positive note tomorrow… my Memphis writers group is meeting Thursday afternoon for our monthly critique session, and then I’m leaving Friday morning for the Yoknapatawpha Summer Writers Workshop in Oxford with my friends, Daphne and Katherine. So… there should be fun posts in the coming days!

Oh, and of course, I hope my readers will feel free to leave a comment about what I’ve written here—even if you disagree!