I miss Will, MacKenzie, Charlie, Jim, Maggie, Sloan, Don and Neal! This weekend I finished binge-watching the HBO series (three seasons) “The Newsroom” on Amazon Prime Video (using Roku). This wasn’t my first time at binge-watching. A couple of years ago I did two posts about this activity:

The Anatomy of a Binge

The shows I have binge-watched so far include: House of Cards, Breaking Bad, Orange is the New Black, Rectify, and recently Switched at Birth and The Newsroom. 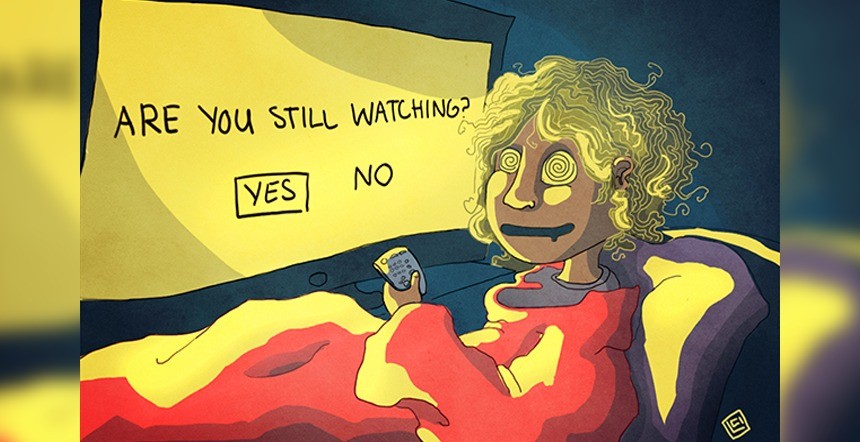 So this morning I woke up thinking about how binge-watching a TV series is like reading a novel. When you watch a TV show as it comes out—one episode each week—you can sometimes lose momentum. Sure, you look forward to the next show, but 7 days later you might have lost some of the immediacy of the plot. You probably haven’t even thought about the characters since the last episode.
But when you watch three years’ worth in a few days (or even a week or two) it’s so much more like reading a good novel. That feeling that you can’t put it down. That you have to know what happens next. (Although this article says that binge-watching just might be changing out brains!)

Yesterday afternoon when I watched the finale of the final season of “The Newsroom,” I found myself sad to be saying goodbye to these characters I had come to care so much about. Will and MacKenzie got married and they’re having a baby! How will that affect MacKenzie’s new position as network president? Maggie and Jim are together but she’s interviewing for a field producer position in DC and Jim just got promoted at ACN in Atlanta! How will their long-distance relationship work out? And Charlie (Sam Waterston) died.  For me he was the glue for the show, so maybe it helped to have him die as the series ended. But I have to admit that I cried.

I recently also binge-watched another series on Netflix, “Switched at Birth.” Not nearly as well written or acted as “The Newsroom,” but the story-line was unique and I was sucked in. Again, when it ended, I found myself wondering what would happen next for Bay, Daphne, Emmett, Toby, and their families? I was fascinated by the partly deaf cast and the ASL (American Sign Language), which I realized I was learning a bit as I watched each episode. I’m excited that they plan to air 10 new episodes beginning in January 2017 (ABC Family) but now I’m wondering if I’ll watch one each week, or wait until they’re over and binge-watch all 10 of them?

Now I find myself wondering also what I’m going to read next. Having just finished a wonderful (nonfiction) book, Dispatches From Pluto: Lost and Found in the Mississippi Delta, by Richard Grant, I also didn’t want it to end! I’m looking at three books next to my “reading chair” in my office and considering how well it will work to read all three at once: Robert Walker (a novel about a homeless man in Memphis)by Corey Mesler, A Lowcountry Heart: Reflections on a Writing Life (Pat Conroy); and A Charmed Life, the 1955 novel by Mary McCarthy, author of The Group. I’ve already read parts of the Conroy book, and I’m excited to see his wife, Cassandra King, who wrote the introduction, this Thursday night at the Thacker Mountain Radio Show at Off Square Books in Oxford, Mississippi. It’s the two novels that I might have to read one at a time. Here goes. Have a great week, everyone!