This past Sunday was my second time to read from my Circling Faith essay in a church. The first time was actually from the pulpit at First Presbyterian Church in Oxford, Mississippi, in September. There were about fifty people in the audience. This time I would be speaking to a smaller group in the “side chapel” at St. John’s Episcopal Church in Memphis. A little less intimidating. And while the venue didn’t offer the architectural and cultural memories of my (Presbyterian) upbringing that the church in Oxford stirred up, it took me by surprise, on several levels.

The first surprise was just before I spoke. Some folks were coming out of the church from the early service. Others were gathering for coffee before Sunday School classes began. I ran into

Rev. John Sewell. A delightful man. I met Rev. John a few years ago when he and two women from his parish—including Deacon Emma Connolly—took my icon workshop at St. John Orthodox Church. I remember the first time I saw his more colorful side. During the workshop, whenever I wasn’t giving formal instructions, I would play Orthodox music quietly in the background and encourage the students to remain quiet and prayerful as they worked. Writing icons is very intense, spiritually, emotionally and artistically. At one point after several hours of this intense quietness, Rev. John’s voice boomed across the room, “Shit!”

He had  messed something up on the icon he was writing, and his frustration leaked out at just the moment we all needed a little comic relief. Laughter filled the room. The rest of the workshop felt a little less stifled. It was as if he had  given us all permission to be human.

So, when I saw him on Sunday, I introduced myself, not knowing if he would remember me or not.

“Of course I remember you.” He smiled as I took his hand. “And I went to seminary with one of your Orthodox priests—back when he was Episcopalian.”

Small world. Father Stephen is one of my favorite priests. I’m a regular reader of his blog, “Glory to God For All Things.” In fact my post last Friday was about his podcast on Ancient Faith Radio, “The True Self and the Story of Me.” He’s an excellent writer. And I think it’s no coincidence that his daughter attended the Memphis College of Art. Creativity might or might not be genetic, but I think it definitely flourishes where it’s encouraged.

After my reading, I gave a short talk on getting started writing memoirs and essays. Emma Connolly, who invited me to speak, is trying to start up a writing group at St. John, and asked me to share some things that might help kick it off. I enjoyed talking about my story with these wonderful people who came to worship God on a Sunday morning, and pthen aused to listen to my essay—which chronicles a small part of my own spiritual journey—and then engaging in lively conversation about the work and art of writing.

I stayed for the church service afterwards, which brought more surprises. I didn’t realize how similar the liturgies are, for the Episcopalian and Orthodox Churches. The “flow” felt familiar, and I felt quite at home worshiping there. And then the thing I didn’t see coming—the music. The hymns were familiar from my childhood and brought tears to my eyes. During most of my early years as a convert to Orthodoxy, I rejected so many things from the Western culture in which I was born and raised—especially art and music.  As I thought about the other contributors to the anthology in which my essay appears, I realized how much of my life I have been “circling faith”… the faith of my fathers and the new/old faith of the Orthodox Church.

As we sang Washington Gladden’s hymn, “Master Let Me Walk With Thee,” (1879) I wondered how I could reclaim this lost part of my spiritual history while continuing to embrace my Orthodox faith. (Music: Maryton by H. Percy Smith)

In lowly paths of service free;

Tell me Thy secret; help me bear

The strain of toil, the fret of care.

And then Rev. John gave a homily that reminded me of Father Stephen’s book, Everywhere Present: Christianity in a One-Storey Universe. He talked about duality, and how we don’t live in a two-story universe! At one point he said,

“We are to live in the crack between the contradictions.”

And I thought about the things I’ve been learning about living with ambiguity—embracing joy and sorrow simultaneously—and learning to be at peace even without having all the answers to my questions. 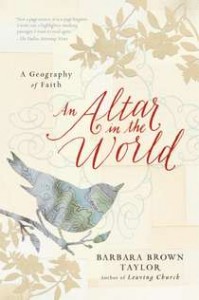 After reading from my own essay in Circling Faith, I read a bit from Barbara Brown Taylor’s essay, because Barbara is an Episcopal priest. (She’s the author of An Altar in the World: A Geography of Faith, and other books.) And I think she gets this business of living in a one-story universe:

“Sacraments schooled me in the wedding of spirit and flesh. I learned how to do the official ones in church—not just communion, but also baptism, reconciliation, the laying on of hands—and then, when I had the hang of seeing the holy in the most ordinary tings, I moved on to celebrating the sacraments of picnic lunches, ordinary baths, forgiving embraces, and rubbing sick friends’ feet.”

What a joyful experience I had on Sunday. I’m so grateful to my friend, Emma Connolly, for inviting me. In addition to being on the clergy staff at St. John’s, she heads up WriteMemphis and does tons of wonderful volunteer work. She even brought copies of Circling Faith from Corey Mesler at Burke’s Books (who hosted our first reading for Circling Faith in Memphis back in July) and sold them to the people who came. It was a little surreal signing books inside the beautiful chapel where people were coming to pray, but then I thought: here we are—in our one-story universe. God and man coming together to celebrate faith, writing, art, and music.

P.S. As an aside, our son, Jason, was in the Memphis Boychoir in 1991-92, which is part of the music ministry and community outreach at St. John’s Episcopal. In this video celebrating their 25 years, Jason is on the front row (third from left) in the black and white photo at the start of the video. Our friend Michael Elliott—whose wife, Margaret, is choir director at St. John Orthodox—was also in the choir that year. (He is interviewed in the video.) And now, Michael’s son, James, is part of the choir. I enjoyed going to one of James’ concerts at St. John’s last year. What a great tradition. Another way of circling faith . . . .

4 thoughts on “Faith on Friday: The Crack Between the Contradictions”